STOP PRESS!!! POETRY TRAIN ANTHOLOGY
After some persuasion and discussions with my publishing partner I am pleased to announce that we are going to publish an anthology of the best poetry performed at my Poetry Train open mic events. I will be collecting and collating over the next twelve months and look to publishing mid 2015, so if you are interested in having your poems included make sure you come along on the last Wednesday of the month and submit your contribution. The anthology will be available on Amazon and Kindle and all the usual outlets and of course at a reduced rate to contributors through my web site, or me personally. So let’s get poetically wordy!

STOP PRESS 2 !!!!! PUBLISHING SERVICE
I will also be in the position shortly to offer a publishing service where you will be able to publish your own books through me at a reasonable cost and be able to have just one book a time printed (if that’s all you want), with no ridiculously high set up cost or minimum order. Watch this space, I’ll let you know when it’s all in place.

art forms, mostly musical and theatrical to give a dramatic and entertaining edge to his

work, and indeed, the work of others. 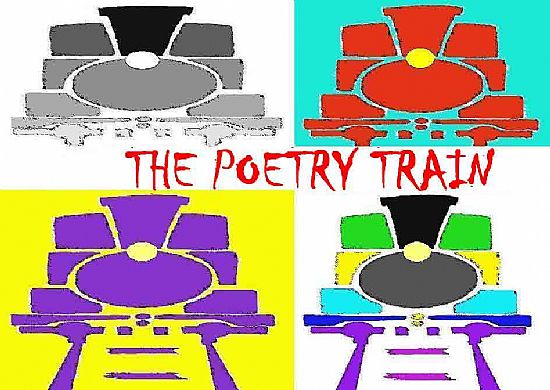 Review by Gary Longden
This is an event which Behind the Arras has been meaning to get to for some time. Finally happenstance fell sweetly , and I caught up with the September instalment of this monthly event. The Britannia Hotel itself is a middle ranking city centre establishment which clearly pedals hard to prosper in these difficult economic times. Busy with a range of functions happening I was surprised to be offered a curry with the pint I had bought at the bar – value for money is clearly something the Britannia believes in on a Wednesday night. The venue itself was a downstairs conference room although the exact room varies according to availability, but the direction boards form the foyer were clear enough.
Master of ceremonies is poet, author, artist and sculptor Tony Stringfellow whose easy manner and credibility eased the evening along gently, but purposefully. As well as overseeing proceedings, he both read a few of his own poems and read a selection of poems entered into an NSPCC sponsored competition organised by Stuart Favell. For the latter, the audience were asked to rank a collection of nine submissions in a vox pop.
Inevitably, the standard set by Tony was formidable. Past-ex amusingly told of a past love,Princess movingly juxtaposed the pride that all of us fathers feel for our daughters with the hard times that can befall some. But it was To the Moon which really caught my ear. The recent fortieth anniversary of the first moon landings has prompted many reflections from wizened fifty somethings recalling the youthful wonderment of Man’s greatest technological achievement. Moondust ,by Andrew Smith, definitively caught the zeitgeist of the era with his interviews of all those who had set foot on the moon before old age claimed them. Tony’s perspective was somewhat more cynical as he contrasted the naive optimism of the time with some of the illusions of the contemporary sense of achievement . His line that Woodstock was “high on hypocricy,” the embodiment of the moral confusion which ebbed and flowed between the sixties and seventies.
The assembled poets took apart in an egalitarian round robin of readings enabling a good few to be aired. Jack Edwards impressed with On the Night Gary Hit the Town (not about me!), Scribbles and Sonnet, Martin Jones’ memorable contributions were as definitively idiosyncratic as ever, and Stuart Favell amused with a series of poetic shorts.
A good quality microphone ensured that all were easily heard in a relaxed and supportive atmosphere at a readily accessible City Centre venue, the 10pm finish offering those who needed to use public transport a chance to do so too. A fine night, led by a distinguished literary figure, Poetry Train next plays on 26/10, but Tony is leading another one off open mic night at the Cock Inn, Holyhead Road ,Wellington, at 8pm on 17th October. 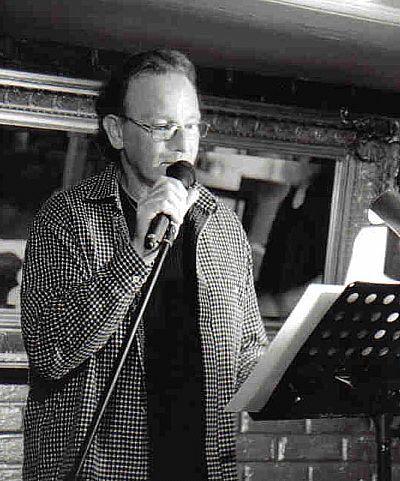 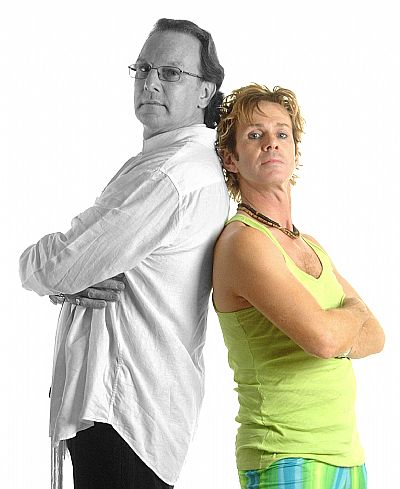 You can catch the Poetry Train open mic night in Wolverhampton on the last Wednesday of each month at the Lych Gate Tavern, Queen Square, Wolverhampton, 8pm departure. For all those who are wordy. 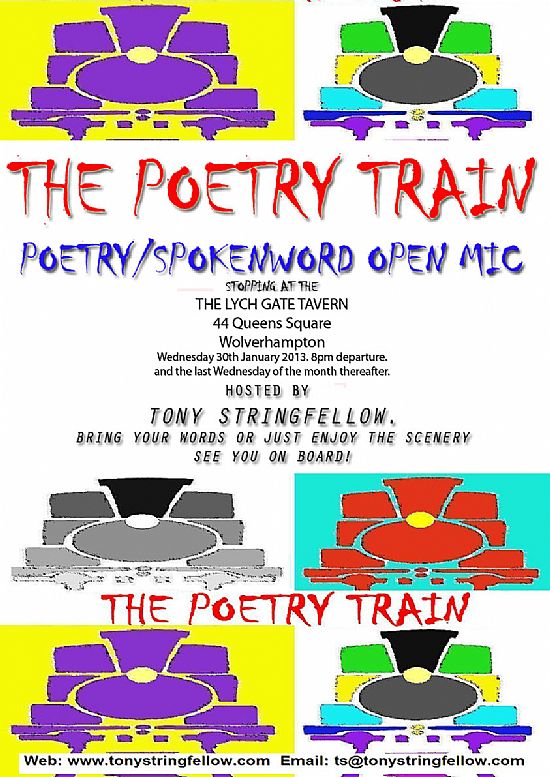 The Rock’n’Roll Poetry Train embarks on a journey that combines the raunchy entertainment of Rock’n’Roll with dramatic, thought provoking Poetry.
Rob Cairns’ flamboyant and energetic delivery of classic songs is in direct contrast to the serious, yet dramatic reciting of
Tony Stringfellow.
The styles of the two artists rebound off one another with a perceptive rhythm of performance that leads the audience in an engrossing dance of topics, fostering thoughtful consideration.
It is an ongoing journey with new scenery around every bend of the track. "

“Tony - poet, sculptor, radio presenter - did a short, very well received, stage spot last year. He returns this year with something rather different.... poetry meets song.... the poems of Tony, the songs of multi-instrumentalist, rock n' roller, Rob (who, here, is in acoustic guitar mode). So what's it all about? "Well," explains Tony, "Rob and I are 2 Wild Minds that came together in 2005 - combining our creative talents. With some intriguing results! The mix of my poetry and Rob's songs is a thought-provoking, engaging combination. If you like - both Minds bounce off each other in a dance of poetry and music that excites the neural pathways as well as your ears..." Juxtaposing poetry and song - what an intriguing concept! And 2 Wild Minds really make it work. Their show is absorbing, inciteful, intelligent and, above all, very entertaining. So, if the word 'poetry' tends to make you shy off, then, this time, don't! Tony just ain't that sort of poet...” 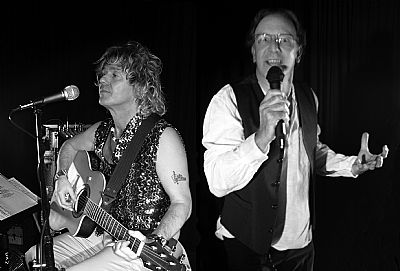 Rob Cairns and Tony performing at the Wellington Literary Festival

performing together as song smith and word smith....

If you would like to book Tony, Rob or both please email Tony on 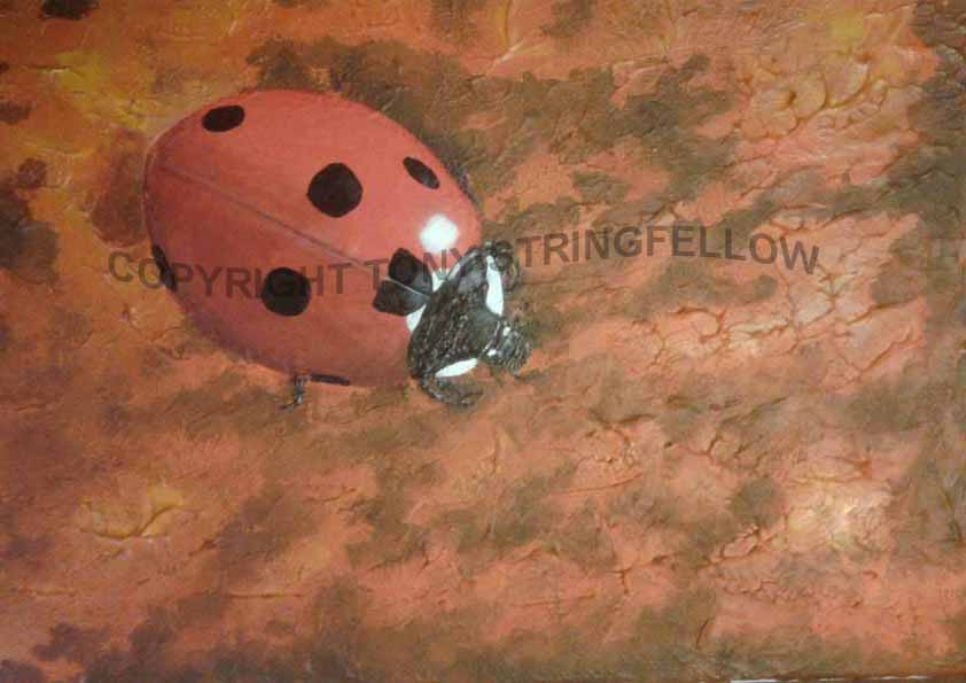